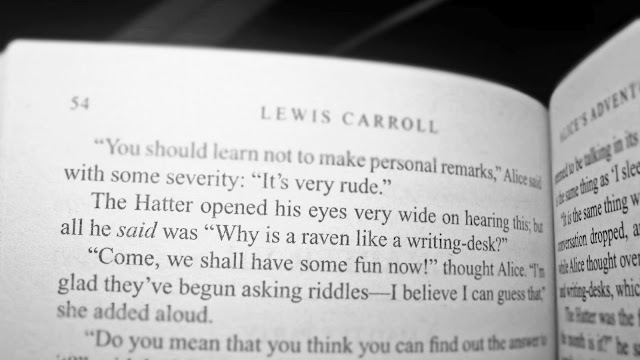 In Alice's Adventures in Wonderland, Lewis Carroll famously left a riddle unanswered: Why is a raven like a writing desk?


"Have you guessed the riddle yet?" the Hatter said, turning to Alice again.
"No, I give it up," Alice replied. "What's the answer?"
"I haven't the slightest idea," said the Hatter.
"Nor I," said the March Hare.
Alice sighed wearily. "I think you might do something better with the time," she said, "than wasting it in asking riddles that have no answers."

In a later edition Carroll offered an answer: Because it can produce a few notes, tho they are very flat; and it is nevar put with the wrong end in front! Alas,  a humorless copy editor ruined the best part of that joke by changing 'nevar' to 'never' before the edition was published, so the answer was never published as intended.

Another excellent answer was offered by 'puzzle maven' Sam Lloyd in 1914 (according to Cecil Adams' The Straight Dope): Because Poe wrote on both.

In my own novel, The Bride Stripped Bare By Her Bachelors, Even, there is a similar unanswered riddle. As the three main characters complete the first half of their road trip from Medford, MA by driving into Philadelphia, PA, one of them, Greg, plays Elton John's song Philadelphia Freedom. He asks the others: For ten points, and today’s grand prize, who can tell me what that song has to do with Duchamp? The chapter ends there; no answer is ever given.

Greg is obsessed with anagrams, for reasons that are partly to do with Duchamp, who greatly enjoyed anagrams and other wordplay. I asked my son to write me an anagram-finding computer program that could deal with long strings, which most on-line anagram tools cannot. There are at least 671 English words contained inside the string Philadelphia Freedom, and my son's program found 296,613 anagrams that used all the letters. I wrote my own computer program to help conduct a systematic search through this set, looking for an anagram that might serve as an answer to Greg's riddle. I found several candidates, but my son and I selected this one as our favorite:

LIMP? HAHA! DID LOPE FREE!
Duchamp's life can be seen a celebration of freedom, as a throwing off of all limitations. He never limped along but rather ran freely: i.e. he DID LOPE FREE.

On Caravaggio As (Like Duchamp) An Artist of Time

The narrator of my novel is an obsessive-compulsive guy named Isaac. Among a few other quirks, he is a devoted admirer of the Italian pre-Baroque painter Michelangelo Merisi da Caravaggio, now known most commonly just as Caravaggio, which is where he was from. Caravaggio was a master of chiaroscuro, painting which relies upon a strong contrast between light and dark. He arguably moved art toward modernity in a couple of ways, one of which is illustrated in this (c. 1595) painting, Boy Bitten By A Lizard. In an excellent little book on Caravaggio, Lambert (2000, p. 32) wrote of this painting that it "is a revolution in itself, marking the advent of the instantaneous in painting" (though also noting its inspiration in Sofonisba Anguissola's c. 1554 drawing Portrait of Her Son Asdrubale Bitten by a Crayfish, drawn for the more famous Michelangelo). This focus on time in painting allows us, perhaps, to draw a direct line between Caravaggio and Marcel Duchamp, whose (1912) Nude Descending A Staircase #2 deconstructed time into instantaneous pieces and then put them back together again. [On time and Duchamp, see also this post and this post.]
Posted by Chris F. Westbury at 12:32 1 comment:

Although today, April 13th, is indisputably my own birthday (thanks for your congratulations), it might not actually be Samuel Beckett's birthday, despite what you may have read on your Twitter account or elsewhere today. It pleased Samuel Beckett to believe that he was born on a Friday that was simultaneously Good Friday and Friday the 13th: April 13th, 1906.

However, according to his biographer Anthony Cronin, Beckett's birth certificate indicates that he was born a month too late for such an auspicious entry into the world, on Sunday May 13th, 1906, with the birth being registered four weeks later, in June, as was customary. Of course, it might be an error on the birth certificate. The matter remains uncertain. In his biography Samuel Beckett: The Last Modernist Cronin writes "Since Beckett was on the whole truthful about such matters and on at least one occasion claimed to have the authority of his mother for the Good Friday birth-date, the balance of probability is in its favour, but it is a pity nevertheless that there should be any doubt about it."


[Image: Samuel Beckett at Riverside Studios (1984), a lithograph by Tom Phillips that is in the collection of England's National Portrait Gallery. The words are from Beckett's Worstward Ho, and have been adopted as a personal motto both by Phillips and by me.]
Posted by Chris F. Westbury at 14:22 No comments: