On Why Croatia and Jamaica Are the Best Olympians 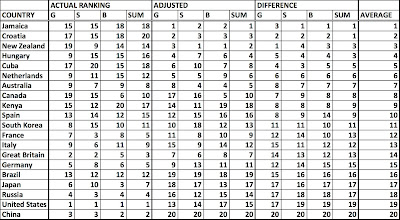 [Note: A small error in the original posted tables has been corrected.]

The Olympic medal rankings are silly because they are not adjusted for population. Obviously countries with a larger pool of talent to draw from will do better than countries with a smaller pool. I have calculated the population-adjusted rankings for the top 20 countries by raw medal count. I stopped at 20 because that is where my own country, Canada, fell.

The table is sorted by the average of all the difference rankings, i.e. by a measure of how much a better a country did in overall ranking compared to what would be expected given its population.

As you can see, by this measure (which to me is much more rational than raw medal count) the countries that did the best are Jamaica, Croatia, and New Zealand. Canada is 8th. The United States and China are big fat losers, 19th and 20th respectively once we adjust for the huge pool of talent they had to draw from.
Posted by Chris F. Westbury at 19:48